To the best of the authors’ knowledge, this is the first description of the use of induced hyperkalemic arrest in the perfused heart to achieve cardioplegia for Minimally Invasive Mitral Valve Surgery.

Minimally invasive mitral valve surgery (MIMVS) is now a well-accepted approach over full median sternotomy for a variety of reasons including, but not limited to, reduced invasiveness, reduced trauma, reduced pain, reduced blood loss, reduced intubation time, and shorter duration of recovery 1 . There are several common methods of performing MIMVS with and without aortic cross clamping including: The Heart Port method 2 , which requires specialized equipment and can have its own technical challenges 3 , the da Vinci robotic assisted system 4 which also requires specialized equipment that for many hospitals may be cost prohibitive and requires a substantial learning curve 5 , right parasternal incisions 6 and the use of hypothermic ventricular fibrillation.

The use of perfused hypothermic ventricular fibrillation is a technique that has been employed for some time and is described in textbooks of cardiovascular surgery for quick operations such as ASD closures 7 . However, a caveat exists and is almost intuitive, that ventricular fibrillation even in the perfused, unloaded, hypothermic heart results in elevated continuous ventricular wall stress, decreased coronary perfusion and ischemia, and increased myocardial oxygen requirement, with a predisposition to subendocardial injury. If left unchecked this environment may result in compromised ventricular function 8 .

The surgeon that may be confronted with a patient, in which MIMVS is the best option, may not have prior experience or find him or herself in a circumstance where MIMVS is planned but anatomical or other challenges present at the time of surgery that will result in an excessive fibrillation time. In these situations the surgeon is left to either abandon the technique or hope for the best.

For these stated reasons, we postulated that there might be another approach to achieve cardioplegia without the need for aortic cross-clamping and direct coronary infusion of cardioplegic solution.

We considered the use of induced systemic hyperkalemic arrest and proceeded with a review of the literature. Our review revealed only one case of severe systemic hyperkalemia as a complication during warm heart surgery and normothermic cardioplegia. In this study, the authors used a variety of pharmacologic treatments to reduce the serum potassium from 13.6 to 6.5 within 30 minutes 9 and did not report any short or long term sequela as a result of the hyperkalemia.

Our patient is a 74 year old morbidly obese female with prior CABG surgery in 1999. Her LIMA graft to the LAD and SVG to the OM1, OM2 and RCA are patent. She now presents with severe CHF and severe mitral valve regurgitation. The Cardiac Index at the time of surgery was 1.3 L/M2, MVO2 53%, and pulmonary arterial pressures of 60/43. The surgeon opted for a minimally invasive approach to protect the patient’s bypass grafts, along with the previously enumerated reasons to perform MIMVS.

Our technique used was as follows: Potassium Chloride 80 mEq was added to the perfusion circuit prime. Following initiation of CPB and systemic cooling to 24 degrees centigrade, an additional 240 mEq of potassium chloride in 40 mEq increments were added as needed to the perfusate to achieve and maintain electrical quiescence over the course of the operation (Figures 1 and 2). A total of 320 mEq of potassium chloride was used. 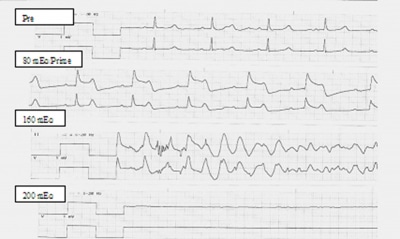 The initial laboratory analysis produced a serum potassium result of 18 mEq/L and upon immediate repeat was 13.6 mEq/L. We believe that the first lab was sent too soon after administration of the initial potassium chloride boluses. Complete electrical quiescence was achieved during the duration of time that the heart would have had to fibrillate, which was 92 minutes, and valve replacement was completed. During the time that the left atriotomy was being closed, Zero Balance Ultrafiltration (Z-BUF) as well as dialysis was performed for 45 minutes to achieve a serum potassium level by laboratory analysis of 6 mEq. Total Z-BUF volume was 8 liters. The dialysis fluid was changed after 20 minutes for a second run of 20 minute duration. During dialysis the blood flow and solution rates through the hemoconcentrator were maintained at 400 ml’s per minute. The heart returned to a normal sinus rhythm without need for defibrillation after several minutes of ventricular pacing, and the patient was successfully weaned from CPB on renal dose Dopamine and Primacore infusion at 0.5 mcg/kg/min. One 30 mg bolus of Brevibloc had to be given for an episode of SVT prior to termination from CPB. The cardiac index post CPB was 2.4 with an SVO2 of 70 and the patient’s cardiovascular status maintained like this throughout the course of her recovery in the ICU. The patient did not require pressor agents throughout her ICU stay. The patient did require re-intubation for pulmonary insufficiency on her 3 post op day and was returned to the operating room to remove a large clot in the right chest. The patient was extubated 14 hours later. The patient was discharged from the ICU on post op day eight.

The dialysis system consisted of a standard hemoconcentrator 10 with the dialysis solution flowing countercurrent through it. (Figure 3) 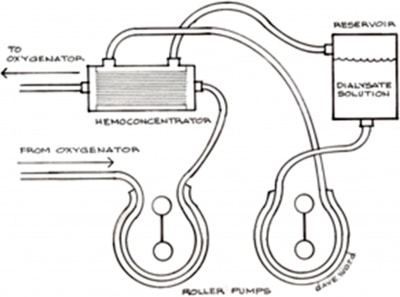 The dialysis solution contained 2 liters of 0.9 NaCl, 1 liter of 0.45 NaCl, 100 mEq of NaHCO3, 1 gm of CaCl and 1.5 Gms MgSO4. Flow rates through the hemoconcentrator, as well the dialysis solution were maintained at 500 ml/min each. The patient had 200 ml of urine output during the duration of CPB and was given 40 mg. of furosemide upon re-warming. Serum potassium levels in the ICU remained stable and within normal limits. An additional 200 mEq of NaHCO3 were given during the Z-BUF period, which is common as bicarbonate is easily diluted during the Z-BUF technique when the replacement fluid does not contain buffering agents.

We conclude from this case that surgeons wishing to perform MIMVS in circumstances that may require fibrillitory arrest for greater that 60 minutes and are concerned that long term fibrillation will deplete high energy phosphate stores and may compromise ventricular function, now may have another technique to arrest the heart and preserve ATP stores and cardiac function with a technique that was simple, effective and could be performed by the perfusionist without the need for additional equipment purchases by the hospital. We further believe that in this particular circumstance, which required 92 minutes of fibrillatory arrest in a patient with compromised LV function, termination from CPB would have been much more difficult and very possibly, improbable.

Additionally, we think that the Z-BUF technique was also contributory, allowing us to enjoy excellent LV function by removing pro-inflammatory mediators and myocardial depressant factor prevalent in this type of case 11 , 12 .

We believe that further investigation is warranted on the ability to utilize this technique in lieu of fibrillation on challenging minimally invasive mitral valve repair or replacement. 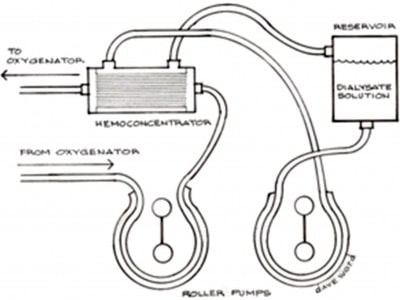